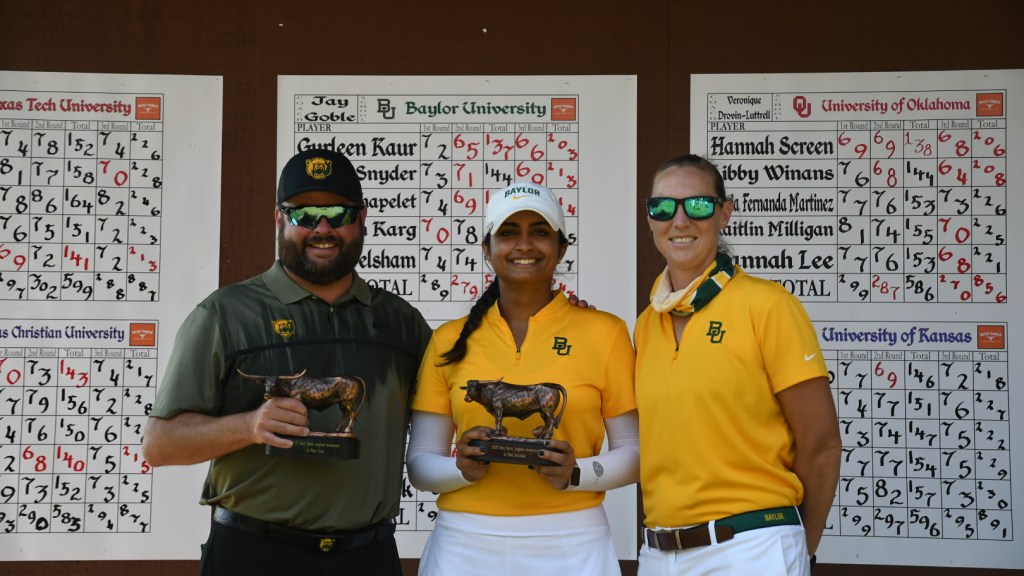 Players circle events on the calendar for various reasons – as a lofty goal, for good memories or for home ties. Gurleen Kaur put a star next to this year’s U.S. Women’s Open for the last reason. The Baylor redshirt junior’s game has been shaped considerably on the grounds of Champions Golf Club, host of this year’s 75th Women’s Open, which was moved on the calendar from early June to December.

Sutton won 14 PGA Tour titles and captained the 2004 U.S. Ryder Cup team. At the academy bearing his name, he teaches young players how to think, commit and believe in their game.

“I consider him more the mental mentor more than the swing coach,” Kaur said of Sutton, who noted that she relies on Cooper for swing instruction. “He just has so much knowledge about golf. He’s just been a great facilitator to my confidence, especially in junior golf and when I was getting recruited.”

Kaur’s heart fell when local qualifying was taken off the table for USGA events this summer. The top 20 players in the World Amateur Golf Ranking (who are not otherwise exempt) as of Nov. 4 will qualify. Kaur is sitting at No. 60.

The Houston native has put two checks in the win column these past two weeks playing college golf – and statement wins at that. She won the Schooner Fall Classic at 5 under. The next week at the Betsy Rawls Longhorn Invite, Kaur went 13 under (Baylor was 21 under as a team) to win by one.

“Just like both courses I’m super familiar with,” Kaur said. “Oklahoma, that was my third year playing and then University of Texas, I’ve played that golf course I don’t know how many times. So many junior events there, several college events.”

Highlights from Baylor’s win at the Betsy Rawls Longhorn Invitational, which was the Bears’ second 🏆 in as many tournaments this season.#SicEm 🐻⛳️🏌️‍♀️ pic.twitter.com/nxqKlEXOFh

After the latter win, Kaur was asked in an interview what her one goal has been for this fall season.

“To have as many negative tests as possible for COVID,” she said.

Normally, Kaur and her Baylor teammates are tested for the virus once a week. If they’re playing a tournament, that doubles.

Baylor needs Kaur to be healthy and in the lineup. The Bears have won their first two starts by a combined 42 shots. Kaur has been a big reason for it, but Baylor is not a top-heavy team. Kaur was a part of the 2018 Baylor team that lost to Arizona in a playoff to make NCAA match play. The Bears look even tougher now. After team qualifying for the Schooner, only four shots separated the No. 1 player on the roster from the No. 9 player.

Despite growing up in Texas, Kaur never planned on landing in Waco.

“Baylor was never really on my radar because I wanted to go as far as possible from home,” she said, but it’s been nice to be close to her family. Campus is a short two-hour drive from home.

As a freshman, Gaur told head coach Jay Goble she didn’t want to see him on the golf course. She says she’s a let-me-do-my-own-thing type of player. Goble has been more present lately, and the two have worked together to maximize Gaur’s strategy and short game.

“My freshman year especially, I would struggle with the speed of the greens,” Kaur said. “He gave me a lot of drills for lag putting. Also, I would say course management. I think Jay has taught me to be more, not conservative, but smart when I needed to be.”

Besides the U.S. Women’s Open opportunity, Kaur also had to deal with Augusta National Women’s Amateur let-down in the spring. The silver lining there is that her invitation to the 2020 event will be honored in 2021. Kaur barely missed earning an invitation for the inaugural event in 2019.

Gaur certainly missed those marquee events in 2020, but she made big starts over the summer nonetheless, playing the Texas Women’s Open, Women’s Texas Amateur, North & South Women’s Amateur and U.S. Women’s Amateur. Driving up her world ranking was always a motivator.

At this point, any college golf feels like a bonus.

“I never expected to play this fall, especially when ACC and Pac-12 said there’s not going to be any golf for them,” she said. “I honestly thought Big 12 would follow.”

Kaur hasn’t wasted a second of the opportunity.