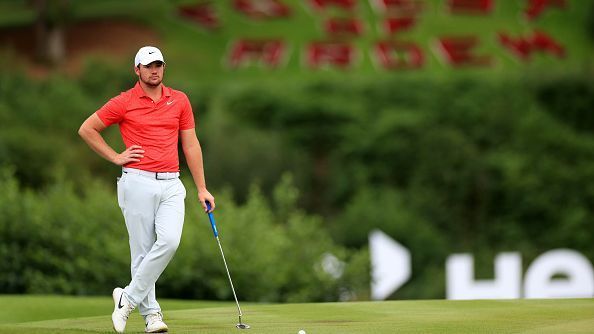 England’s Sam Horsfield plays a shot on the 10th during day three of the Hero Open at Forest of Arden Marriott Hotel and Country Club, Birmingham

Sam Horsfield will take a one-shot lead into the final day of the Hero Open despite leading by six strokes at one stage in the third round of the European Tour’s latest stop in England.

After holding a share of the overnight lead, the Englishman made five birdies on the front nine and looked in total control at the Forest of Arden Marriott Hotel and Country Club on Saturday.

But Horsfield would make just one gain on the way home, giving up three bogeys and a double to sign for a 1-under 71 and a 14-under 202 total that left him one shot ahead of Wales’ Oliver Farr, Danish teenager Rasmus Hojgaard and Mikko Korhonen of Finland.

“My caddie just said to me coming off the 18th green, ‘If someone would have said to you on Thursday you can have a one shot lead going into Sunday, you would take it,”’ Horsfield told europeantour.com.

“I’ve made it a little bit harder for myself from the position I was in but I’m still looking forward to tomorrow, it’ll be a lot of fun.”

Like Horsfield, Farr is also searching for a first European Tour win and he was hopeful his three victories on the second-tier Challenge Tour would hold him in good stead after a 5-under 67.

“It’s a nice position to be in going into a Sunday,” Farr said. “It’s a bit of a step up being on the European Tour but I’ll try and treat it as another tournament and a position I’ve been in before.”

Korhonen matched Farr with a 67, while 19-year-old Hojgaard went one better with a 66.

Sebastian Garcia Rodriguez of Spain shared the lead overnight but had a 1-over 73 to share fifth after setting a course record 10-under 62 in the opening round.

Miguel Angel Jimenez, making his record 707th European Tour appearance, shot a 73 for a 12-way share of 24th on 7 under.