CHARLOTTE, N.C. – Kevin Chappell remembers being as nervous as he’s ever been as a Presidents Cup rookie in 2017. He cherished the chance to develop a more intimate relationship with his fellow teammates in the team room and learn what makes them tick.

“One thing I’ll always remember from that week is Jordan Spieth is the most mature person in every room he’s in, or at least that week he was,” Chappell said. “When he was talking, everybody was listening and taking notes. That’s something I could really pull from. His insight and demeanor is second to none. The guy was just unfazed.”

Spieth will be the first to say that wasn’t the case as a Presidents Cup rookie in 2013 at Muirfield Village.

Steve Stricker, his partner when Spieth made his debut representing Team USA in the pro ranks, carried Spieth, who was out of several holes, for the first nine holes.  “Steve came up to me and said, ‘When are you finally going to start playing?’” Spieth recalled.

Moments such as that broke the tension, and Spieth has quickly has established himself as the backbone of America’s side.

“I’ll never forget Jordan in 2013 bopping into the team room on Monday with shorts and a T-shirt on and started throwing ping pong balls around. And my wife Robin said, ‘Who is that kid?’ I go, ‘That’s the future of our team right there,’ and he has been,” said U.S. captain Davis Love III. “In 2017, Steve Stricker had a little team meeting every night, and Jordan jumped up – I think it was either Tuesday or Wednesday – and he said, ‘Hey, hey, this has been real fun celebrating.’ I think Justin had just won the FedEx Cup, and we had a big time riding the boats in New York. And he goes, ‘Hey, whoa, whoa, whoa. It’s going to be windy tomorrow. We’ve got to get ready. This is going to be a tough match.’ From then on, guys have seen him kind of as a leader. We had some little meetings last night. He’s a very smart guy. He’s a very confident guy. And that’s what we need is guys to step up.

“Maybe Tony’s the oldest,” Love said, forgetting that Kisner is the old man of the team at 38, “but he’s the most experienced and the guy people look to to take the basketball and take the last shot.”

Tiger Woods and Phil Mickelson won’t be involved as a player or a captain/assistant captain for the first time in international competition since 1993. The new guard has taken over and the average age of the team is under 30 for the first time. It’s funny to think that Spieth already is making his fourth Presidents Cup appearance, most of anyone on the team, despite being just 29 years old – and missing the last one in 2019 at Royal Melbourne in Australia.

“I was uncertain if or when I’d get back to these teams,” said Spieth, who was in the middle of his first slump of his career the last time the team match was held against a team representing the rest of the world except for Europe.

Jordan Spieth and Steve Stricker of Team USA celebrate on the 18th hole during the Presidents Cup.

But Spieth rediscovered his game last season, winning the Valero Texas Open last April and made the winning U.S. Ryder Cup team. He qualified for the Presidents Cup 12-man team as a captain’s pick and looks to continue upon his winning ways: 8-5-1 overall record, including 5-0 in foursomes. (We won’t dwell on his 0-3 singles record for now.)

“He’s always been able to get the team fired up with how he plays,” said Webb Simpson, an assistant captain for Team USA, who has been a teammate of Spieth’s on past international teams. “Now, he’s more willing to speak up. That comes with age and experience. He’s really come into his own.”

“He’s like our Ian Poulter,” added Rickie Fowler, referring to how both players seem capable of willing themselves and their teammates to win points. “He thrives on being in the biggest moments.”

When a reporter asked Spieth if he had become Team USA’s “crafty veteran,” Spieth replied, “I guess technically on this team but we’re giving that title to Kiz based on age.”

“I get more excited than nervous now,” he continued. “I know how fun they are and the first tee jitters are something to embrace and enjoy.”

And for Spieth, he still circles back to his rookie appearance and the lesson he learned that day.

“When I start, I think,’ Let’s just be like Strick that first round that I played,’” he said.

Spieth has come a long way from being a teenage captain’s pick in 2013 to the most experienced player on the U.S side. Scottie Scheffler acknowledged he may be PGA Tour Player of the Year and World No. 1, but when it comes to being a team leader and the voice of the locker room, he’ll defer to Spieth.

“He’s been on many teams, so I think there’s certain guys where their voice holds a lot of weight. Honestly, I couldn’t tell you if I’m one of them. I know that Jordan definitely is. He’s been around for a long time, and you’ve kind of got to earn your stripes,” Scheffler said. “You can try to be a leader but it doesn’t matter unless people follow you. This is my first Presidents Cup. I may have had the best year on the course, but in a team environment, things are quite different.” 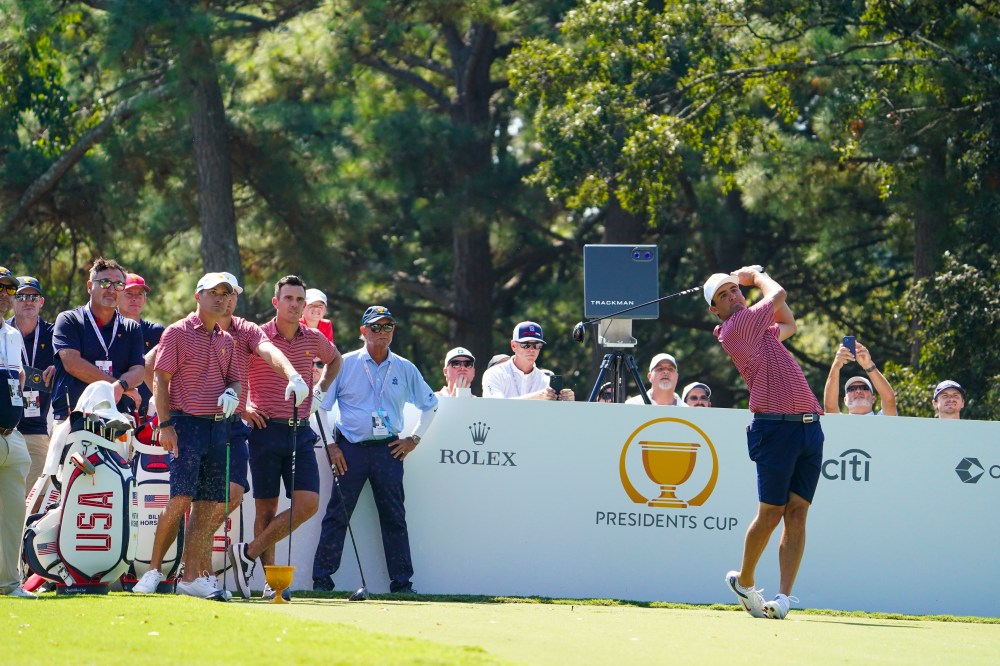