Shades of Billy Casper: Why some pros may lay up on Winged Foot's par-3 third hole

MAMARONECK, N.Y. – They are euphemistically called “half pars,” and they are considered holes that blur the lines between traditional scoring standards.

The par-3 third hole at Winged Foot this week is a perfect example of such concept.

At 243 yards, it isn’t even the longest par 3 that PGA Tour players have seen in the last month – that would be the 251-yard eighth at Olympia Fields (BMW Championship) – but No. 3 on the West Course has history as a “half par.”

During the 1959 U.S. Open, Billy Casper laid up at the third hole all four rounds and won the event thanks in no small part to four consecutive pars at No. 3.

“There’s a reason why Billy Casper laid up on the third hole every single day. That tells you,” Jon Rahm said.

Pull a Casper? Would Webb lay up on a par 3? 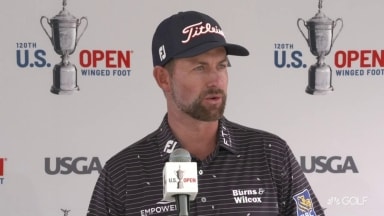 For the modern professional, laying up on a par 3 is often not in the playbook. But this week might change that notion.

“It’s definitely a hole where you really don’t want to go long and a lot of times we’re going to have yardages where we’re in between clubs and we’re always going to hit the shorter club just to be short,” Webb Simpson said. “I hit a shot today, I couldn’t quite get my 3-iron hybrid there, but I still didn’t want to hit a 5-wood long, so I hit it and I was 5 yards short of the green perfect. I’m not going to purposefully lay up, but I will purposefully try to hit it short of the hole to the front pins.”